In Italian: pronounced “Monte Epomeo” is the highest mountain on the volcanic island of Ischia, in the Gulf of Naples, Italy. Reaching a height of 789 metres (2,589 ft), it towers above the rest of Ischia.
One particularly important event in the island’s geological history is represented by the eruption about 55,000 years ago, when a giant magma chamber formed beneath the present-day island of Ischia. Through cracks and crevices in the earth’s crust, the magma was thrown into the atmosphere and the magma chamber was emptied. The cover of the magma chamber collapsed and the basin that was created in the earth’s crust, called “Caldera”, is where today lies the island of Ischia. Since ca. 55,000 years ago, the sea surface was ca. 150-200 m lower than today, this “Conca-Caldera” was dry land. After the increase of the sea level, the island was submerged for several years. This has meant that the original rock, as a result of chemical transformations, has turned into green grass.
New magma flowed in the old magma chamber beneath the present-day island of Ischia, and the cover of the magma chamber began to rise from the sea and bring out the island. This increase has given rise to Mount Epomeo which rises to a maximum height of about 789 m above sea level. The fact that the island emerged from the sea, and from mineralogical characteristics, is also confirmed by the presence of marine clays overlaying the green grass and fossils.
The volcanic activity is currently in a quiet phase, and is characterized by the development of very intense hydrothermal springs and fumaroles. The ascent to Mount Epomeo is definitely an experience not to be missed for those who visit. There are many possible paths to reach it. The proposed route, crossing the island from one side to another, will experience some of the geological history – environmental and anthropological aspect of the island.
At the top is the church of S. Nicola (from which derives the name of the summit) with its hermitage carved into the stone green spaces, where for years stayed the hermit Giuseppe D’Argout, former commander of the garrison of the Aragonese Castle in 1700. A path carved into the stone leads to the summit, carved by wind and edged with yellow lichen. From here you can enjoy a 360 degree view (from which the origin of the name Epomeo: Epopon or Epopos I look, I aim around). In front of the wood is recognizable Falanga with Santa Maria al Monte, Monte Nuovo and Forio below. The Pontine islands, not so far away, form a continuous line with the Lazio coast. By shifting your gaze to the North Coast you’ll see the Phlegrean islands of Procida and Vivara, Vesuvius, and Lattari mountains and the island of Capri.
See more images in Ischia Review 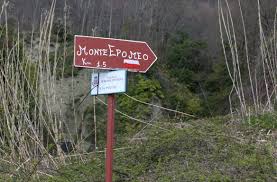